On a sweltering hot June midnight, I arrived in Skopje, the capital of Macedonia. I was awoken the next morning at six by some of the brightest sunbeams I’d ever encountered while lying in a pool of sweat. This Pacific Northwest girl was in for a rude awakening, weather-wise.

I emerged from my hostel and wound my way through tiny side alleys, along the side of a highway, and past bakeries setting out their freshly-baked wares. As I neared Macedonia Square, I was greeted by a giant statue of Alexander the Great on a massive fiberglass and steel pedestal (more on that to come soon).

The most notable feature about Skopje is the aftermath of its multi-million massive government-funded makeover. From 2010 to 2014, neo-classical architecture and statues have replaced existing buildings and structures. The presence of these kitschy, brand-new buildings is extremely disconcerting, particularly when compared to the rest of the infrastructure, which is sorely lacking.

Huge unfinished construction projects continue to dot the city centre, especially towards the outskirts. The suburbs and residential areas are full of crumbling houses and streets which desperately need upkeep. It’s clear that these priorities haven’t benefited the majority of folks living in Skopje — making it one of the most controversial projects to be undertaken in the city.

I soon came to learn that the story of Alexander the Great was also a hotly contested one in Macedonia and Greece.

“In the 23 years since the landlocked state proclaimed independence, Alexander the Great has dominated the dispute. Athens says the Greek-born general is irrefutable proof of Macedonia’s Hellenic credentials; Skopje says he is an inherent part of local identity as the leader of an empire that incorporated the region and extended as far as India. As the row has intensified, Greece has blocked its neighbour’s bids to join Nato and the EU.”

That hasn’t stopped Macedonia from erecting a massive statue of him (“Warrior on a Horse”) in the main city square of Skopje, which lights up at night (unfortunately, it wasn’t working when I was there). You can read more about this feud here.

A day in Skopje can be exhausting — I’ve never been to Las Vegas, but I imagine it to be very similar. Thankfully, if you’re in need of an escape, just outside Skopje towers Vodno Mountain, which tops out at Krstovar Peak (1066 m). It’s home to the Millennium Cross, erected in 2002 to commemorate two millennia of Christianity.

The cross was jointly funded by the Macedonian Orthodox Church and Macedonian government, and the contribution from the government became a source of controversy amongst Macedonia’s incredibly ethnically and religiously diverse population.

While there is a cable car that takes visitors to Krstovar Peak, I decided to hike up Vodno Mountain, and descend via a different route towards Matka Canyon. Blaze — a Macedonian who had moved to Chicago a few years ago, and an old friend of the hostel owner — was keen to accompany me on the trek, and I was glad for the company.

While the start of the trail was well-trodden and clearly marked, signage became rarer as we journeyed on and where available, mostly faded. I was grateful to have Blaze with me as we found ourselves asking for directions from elderly Macedonians who were much more familiar with the terrain than we were.

The steady downhill scramble proved to be hellish on my knees and ankles. However, the view of Matka Canyon as we emerged from the last stretch of rocks and trees took my breath away. 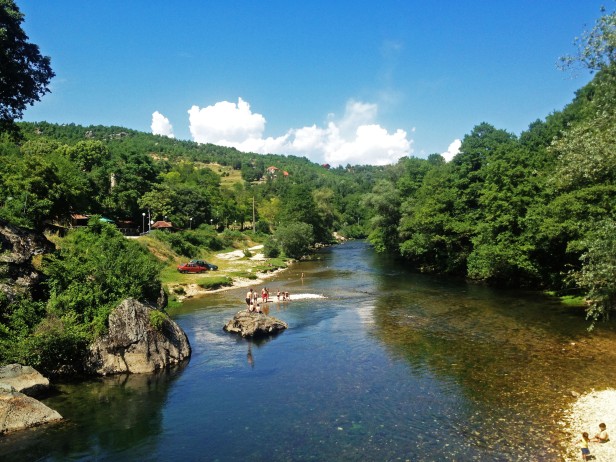 I was hot, sweaty and tired, and all I wanted to do was jump into the clear, inviting water. Blaze had other ideas, though — lunch beckoned, and in hindsight, was probably a better idea. Nothing tastes quite as good as it does after a strenuous hike, and a hearty chicken stew certainly hit the spot.

Skopje is extremely affordable. Just be careful — taxis are, for the most part, a cheap and safe way of getting around, but make sure that the meter is on so you don’t get overcharged.

4 thoughts on “Skopje: the Las Vegas of Macedonia”

Solo traveller, hiker, and adventurer with more travel instinct than cash. These days I call Vancouver home -- or at least, as much as a Third Culture Kid can ever know what home means.